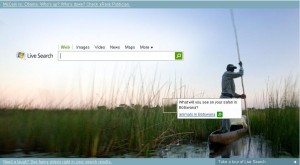 Microsoft has launched a new design on the home page of their Live.com search engine that you can see in the screen shot to your left.

The image has squares that link to different searches (image, map and web). For example, in the screen shot here the tool tip reads “What will you see on your Safari to Botswana?” and links to an “animals in Botswana” search.

I expect that they’ll use other images and search in the future, and this has a lot more to do with the branding of their search assets than any functional change. Because there is a lower cost of entry to having mapping and image search Microsoft’s maps and supplemental search services sometimes have more bells and whistles than Google’s equivalent features and Microsoft is keen to get these in front of people.

Search has been the sexy web app for years, with only social networking threatening its status as the cool king of web applications. And anyone gunning for Google seems to get a lot of attention. A husband and wife team of former Google employees launched a search engine called Cuil (pronounced “cool”) this week and the web was abuzz with the drama.

“Ex Googlers build Google killer” was the salacious angle behind the buzz, but when the search engine actually launched, the poor quality of its results and unreliability of the service generated a counter-buzz backlash. That Cuil representatives seemed snappy in response to the criticisms didn’t help and I’ll go ahead and predict that this search engine won’t go anywhere.

They differentiate themselves from the current search engines with a different user interface that is simply a lot less usable and while they claimed to have the largest index upon launch, they don’t and their relevance is behind all the major search engines (even Microsoft’s).

There is speculation that they launched this search engine in the hopes of being bought by a search engine like Microsoft, who has shown a willingness to spend big money this year (Yahoo takeover attempt, Powerset aquisition) to get search IP, market share, and talent.

That may be all that Cuil brings to the table. They went cheap on the backend and can’t realistically challenge for Google, Yahoo or even MSN scale. Their best hope is that Microsoft sees enough value in them to purchase them.

Google’s bringing it out to measure again… 1 trillion urls!

Google announced a new milestone of 1 trillion urls, which is impressive enough that we might as well forgive them for bringing us back to the index measuring wars of yesteryear. In the past, search engine bragging rights were about how much of the web their index contained. Then Google stopped publishing their index total on their home page and said it was quality (of search relevance) and not quality that mattered.

But a trillion’s a bit much to keep mum about so there you go. It doesn’t mean much but it’s interesting that it comes right before a stealth competitor launches a search engine they will claim to be the biggest (I think it’s a coincidence).